My time in Bhutan 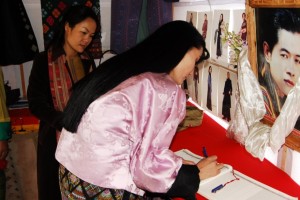 By living in a country where the textiles are the traditionlly preferred gifts, I have a new found respect for objects created by human hands. Especialy after a long trip to Trashiyangtse by car, through Bumthang village and the small mountain town of Mongar, I have seen the most beautiful pieces of traditional textile woven by a very rough fingers. I came back to Thimphu with a plan to utilise the Bhutanese traditional textiles by incorporating them into modern clothing and every day wear and thous appealing to customers with more western views on fashion.

I got a Danida miniproject and the project was intended for young people from poor families who could not afford to study for higher education. Sewing. Yes ! That was also how I did start my life.

I did not have any books about fashion, no teaching experience, I didn’t even know the English words for such things as buttons, rectangles, patting materials, shoulder pads, etc. Thimphu didn’t have a single sewing machine, which could make a button hole, not to mention getting a needle number 11 , and a hand needle looked like a chop stick !!! ….But Thimphu has extreamly beautiful traditional textiles , and I have around 72.000 DKK from Danida and… my heart. On top of that I got a very big help from director Tshering Tobgay in the Ministry of Labour and Human Resouce and from the princepal of the National Institute for Zorig Chusum, Jigme Yezer, where I got a wonderful room at the Institute for the project for 2 years. Then a special support from Her Majesty The Queen, Ashi Sangay Choden Wangchuck , who is the ambassador for the textile museum in Thimphu and who has always been in our project catologues. 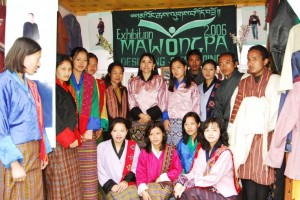 Ashi Sangay Choden Wangchuck with our class in Thimphu

Peter Lowe had given a big hand, by volunteering to make a first Mawongpa catologue. He lived like a local, eat and sleep exact how they do, traveled by a local bus all the way to Tomi, which means “no food to eat” village in Pemagatshel . Karma L. Dorji came any time we need to take a picture, because our products could be sold anytime . He helped us making the second catalogue. When we participated for the first time in the annual Fashion Show organized by the Textile Museum, we took home the First Prize . With 72000 DKK – which I got twice for two years, thanks to ambasador Michael Sternberg and LOD in Thimphu . We got 5 modern Singer machines from India, 5 black Singer machines from the local market for a beginning ( later we bought some more plus one special good Singer machine from Denmark). Besides, we had a local instructor for the first 3 months, an instructor with excellent sewing skills from Vietnam for 1 year and 21 students. We had also a fashion designer and one working in the fashion business who came in as short term volounteeres from Denmark. Students got salary while studying and the earnings from the products sales went into a savings account so they could go back home with some savings. Five of them got a sewing machine as a bonus.

Two students from the first batch were retained as teaching assistants for the second batch, til now one is working as Fashion Design Instructor at Ministry of Labour and Human Resouce, one is getting a higher education in the fashion industry in Seoul, and one is in Delhi as far as I know. Im very proud of them and happy for them that they are standing on their own feet and able to take care of their family .

An advantage was that the students got an opportunity to be in touch directly with custumers from all over the world.Some came to Bhutan as a turist, or some were working there. They visited our class in groups or by themselves and were very impressed by our hard work and lots of natural creativity ! 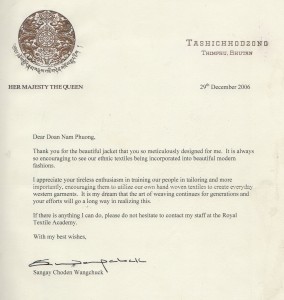 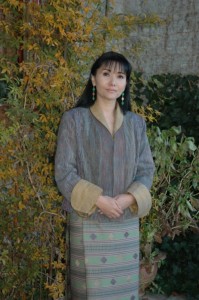 Her Majesty the Queen of Bhutan – Ashi Sangay Choden Wangchuck

The Bhutanese weaving tradition, enriched by diverse local and regional influences, is considered to be one of the world’s great textile traditions. It has remained little known to the outside world as the Kingdom of Bhutan has itself been little known. But as Bhutan emerges out of its isolation, its textile tradition has also begun to attract greater attention.

Bhutan has been on the path to modernization tor scarcely half a century but the effects of modernization/Westernization is readily apparent.  Its traditional culture however is still largely intact, partly because the Government has been conscious of not losing it. The weaving tradition, an important facet of Bhutanese. 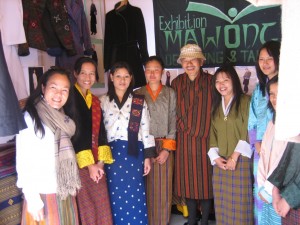 Culture also is alive and remains a part of everyday life. The dresses traditionally worn in Bhutan, the Gho for men and the Kira tor women, still serve to symbolize Bhutan’s uniqueness and its culture. The dresses are made of the brightly coloured textiles woven mostly by hand.

The weaving industry is an important tradition from an economic perspective as well. With its flexible working hours, weaving is perfectly suited to women who are otherwise home—bound, giving them a source of income and a degree if financial independence. The continuation of this tradition is therefore important.

The challenges of modernization are real however, and the primary challenge facing the Bhutanese hand-loom industry is the introduction and popularity of the imported factory-made fabrics. The average Bhutanese consumer, never able to pay high prices for a band woven fabric to start with, has swiftly switched to the newer and cheaper option. This option was made more attractive because the imported fabrics all sport traditional or/pesar (new) Bhutanese patterns. The demand for hand—loomed fabrics has thus decreased and the existing demand are primarily from the more affluent section of Bhutanese society and a fledgling handicraft industry.

This may all change. A young group of tailoring and design students’ have recently emerged on the scene and they see nothing less than a pot of gold at the end of the Bhutanese handloom. They call themselves Mawongpa which means ‘the future’ in Dzongkha. They are led by Doan Nam Phuong, a Vietnamese Expatriate living in Thimphu who has over 2O years of experience as designer and tailor in the highly competitive Vietnamese fashion industry.

Taking advantage of the uniqueness that Bhutan as a nation represents, the ascendance of Bhutan on the tourist map, as well as the rapid growth of the Bhutanese middle class, the little ‘pot of gold’ that the members of Mawongpa see is the nascent Bhutanese market for well-designed, cut and stitched garments using locally woven textiles. 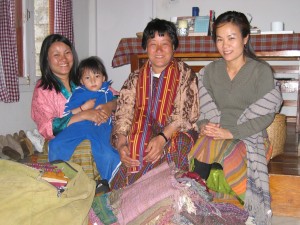 One of the best suppliers from Rahdi, Sonam Wangmo with her daughter and grandchild.

When Phuong experimentally designed a new-style women’s jacket (called tego) she was surprised by the scale of enthusiasm it generated among the local Bhutanese. The fact that there is some market- potential for these garments has now been established firmly as demonstrated by the tremendous popularity the students’ products enjoyed amongst expatriates, tourists as well as fashion—conscious local Bhutanese.

Under the firm tutelage of their instructor, approximately 21 students have been learning the craft of designing and tailoring over the past 2 years. In October 2006, Mawongpa participated for the first time in the annual Fashion Show organized by the Textile Museum. The students surprised themselves by taking home the First Prize in the Innovative category and this recognition gave them much to celebrate.

The members of Mawongpa of course realize that the demand for their products will more likely be from a ‘niche’ market than the mainstream and that it is important to understand the ‘profile’ of their market. What would be the age bracket that would be interested, the group that will be willing to pay for hand-woven products? These considerations significantly affect the textiles, the patterns and the styles that they choose.

Aware of the tact that their products can be easily under-priced by the innumerable run-of-the mill tailoring shops in Bhutan and across the border, Mawongpa strives to distinguish itself by focusing on authenticity, design quality, and quality of tailoring.

Authenticity comes through the use of genuine hand-woven fabrics. Many of the fabrics are custom ordered from weavers primarily in Thimphu. However, Mawongpa also receives a steady stream of visitors trying to sell hand-woven textiles from individual weavers from all over Bhutan.

The exclusive use of hand-woven items is a challenge however: Standardization of materials is difficult, one batch varying greatly in pattern and shade from the next. Obtaining materials ‘on demand’ is also unrealistic and each item must be specially ordered with at least a 3-week waiting period. Many items, especially those made of hard to obtain genuine yak-wool often turn out to be ‘one of a kind’ products. It is hoped that as the success of organizations such as Mawongpa grows, the weaving community in Bhutan will better position itself to meet the growing demand. 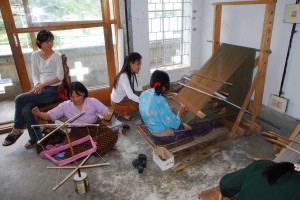 In terms of the quality of design, it is probable that the idea that well—designed garments made of Bhutanese fabrics could be available in Bhutan never realistically crossed anyone’s mind before. Most Bhutanese consumers always purchased read —made brands abroad. With two years already under their belt, it is quite evident to Mawongpa that many Bhutanese do see that possibility now. It is now simply a matter of meeting demand and maintaining that quality.

The quality of tailoring is something else that seldom receives attention in Bhutan, with most consumers satisfied simply by a low price. As a result, few tailors in Bhutan bother to maintain standards in tailoring quality. It has been the bane of all quality-conscious customers who have heretofore been forced to tailor their well stitched clothes outside the country. Mawongpa hopes to satisfy the needs of this small group of consumers with their emphasis on quality stitching.

The idea of blending Bhutanese textiles with modern clothing is not new. It has been tried many times in the past. The efforts however never progressed beyond individual enterprises and an industry as such never emerged.

How far will Mawongpa’s efforts take them this time? They say the sky’s the limit. But only if one hungers enough tor the sky. It remains to be seen whether the members of Mawongpa are hungry enough to achieve their dreams. 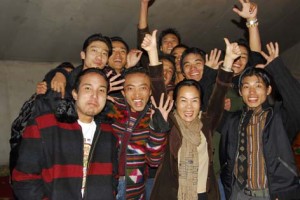 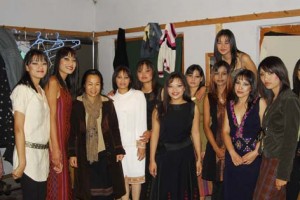 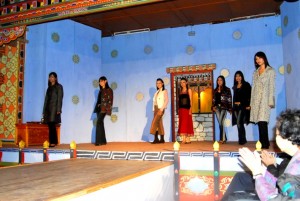 When we participated for the first time in the annual Fashion Show organized by the Textile Museum, we took home the First Prize.